I’ve always seen pictures of Westerners in Thail temples with their hands folded–what to me seemed like a hokey pose that didn’t seem particularly respectful. That is, until I found myself there getting suckered into the very same things.

During my brief stay in Bangkok, my friend Pia and I went on a few tours through Take Me Tours Thailand–a company that provides pretty excellent tours with local guides. Our first tour included temple ruins around Suphan Buri. They were ancient places where the kings were buried, places that used to be functioning temples until the Cambodians came and took the heads off the buddhas to get the gold inside ( this was not presented as a resentful statement, just a fact of history. Our guide for this tour was also Muslim so perhaps this had something to do with her dispassionate approach.) 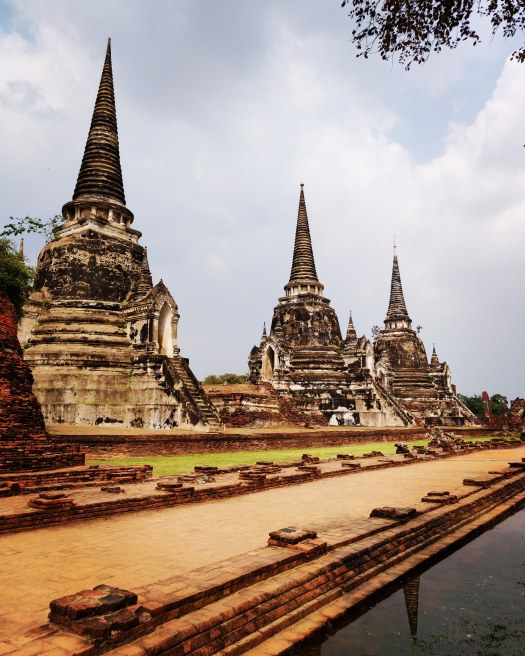 We also went to Wat Mahathat and saw the Buddha head inside tree roots, where our tour guide told us to fold our hands in front of our chest, as I had seen many tourists do before me. I felt weird, but Pia (who lives in Bangkok) said it was pretty common, and here was a Thai person telling me to hold my hands that way for the photo.

Our next tour guide, Nok, was Buddhist and took us to three more temples, all current, functioning ones. She had a lot more information about the different rituals and practices: she explained what everyone was doing, and told us to go buy the flowers and incense and gold leaf paper and showed us where to light it, where to place it, which buddha to stick in on for good luck (often the day of the week when you were born is pretty important).

I was a bit apprehensive about doing this. I’m not a religious person, but I feel a bit squeamish about barging in on someone else’s beliefs and rituals, especially ones that white people seem to think are open to be barged in on. I have seen so many Westerners causally appropriate parts of Buddhism without understanding anything about it, because they think it makes them look chill and open-minded. But here was a Thai person, and a Buddhist at that, telling me and encouraging me to do so. I thought, This must be ok, right?

As someone who was raised Jewish, I thought, is it ok for people to come to our Shabbat services? Of course! There are certain things that, according to Talmudic law and tradition, only actual Jews can do, but it’s not offensive if someone wants to come and pray with us. How many of my non-Jewish friends came to my bat mitzvah, or to our house for Hanukkah or Shabbat dinner? But at the same time, I’ve spent a lot of time thinking about how people sometimes want to “absorb” your culture as if its not something deeper and more complex, as if it’s just some milk they can soak up like a sponge. I cringe when I see people using someone else’s religion or culture like a token because I’ve seen it done with my own.

After our trip to a market for lunch, we went to Wat Saman Rattanaram, a temple complex which almost seemed more like a multicultural theme park. There were several shrines there, not just Thai Buddhist but also Chinese Buddhist, Taoist, and Hindu. There was a giant statue of Ganesha!

It was wild to see all these different religions just sharing the same space, like it wasn’t a big deal. I don’t think I’ve ever seen a Christian saints next to… well, Jews and Muslims don’t really go around plastering icons everywhere, so I can’t imagine what we would contribute. Stars of David? Crescent moon and star?

Moreover, all these shrines were really like an amusement park. There were vendors selling food, and even a few arcade games, plus plastic statues of cartoon characters like Pokemon or Spiderman. We asked Nok why those were in the same place as important religious icons, where people came to pray and meditate, and she said, “Well… the kids get bored sometimes, so they need things to play with.” Which I’m totally down with. Religion and spirituality are important things that profoundly affect people’s lives, but have you ever heard a baby crying during services? They don’t care that people are trying to pray. I don’t remember seeing any fun toys around the Western Wall in Jerusalem. (To be fair, that was over 10 years ago so if anyone has visited more recently, please let me know if things have changed.)

I struggled to write this piece for so long, because even after these strange experiences, being invited to interact with this religion, I still don’t know how I feel about it. I still don’t like when people act like a short trip to Thailand gave them some sort of insight into Buddhism. I still feel weird taking pictures with my hands folded in prayer. Where does one stop merely learning and appreciating a new culture and cross into disrespectful or fetishizing territory?

Seriously though, if you have the answer, please leave it in the comments, kthnx!

3 Replies to “Temples and Tourists”