The more you travel, the more friends you have in more places (high or low is irrelevant for this conversation). After meeting Julia in Herräng last summer, I was excited to visit her again in her native Ukraine. Julia works on cruise ships, so she is often cavorting halfway around the world, but she occasionally has a break from her contract where she’ll go home for awhile.

Unfortunately, this means that her schedule might not line up with the best travel months for the Northern Hemisphere. In this case, she was schedule to come back to Ukraine at the end of January, which meant going to a Kyiv covered in snow and sub-zero temperatures. Not my favorite weather, but when you have to make due, you make due. 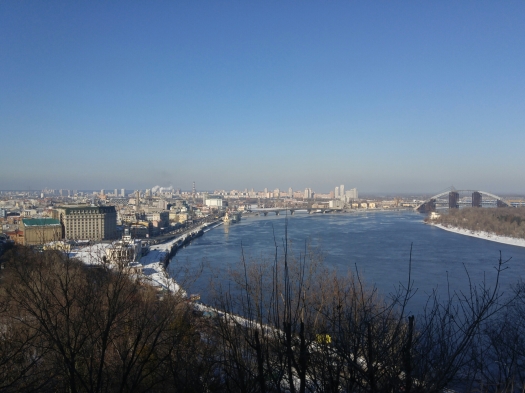 But even though Julia insisted Kyiv is more spectacular in the spring, with the greenery and flowers, there is something peaceful about a city covered in snow; everything is more soft, muted, hush. Gray skies often make colors more saturated, and white snow makes the night seem brighter.

We spent a lot of time talking about language and culture: Ukrainian, Russian, Polish, American, Australian, Kiwi (there are a lot Australians and Kiwis working on cruise ships); the difference between dialects, between regions, between classes and races. We talked over tea and hot chocolate, over Ukrainian dumplings, over Georgian food and mulled wine. 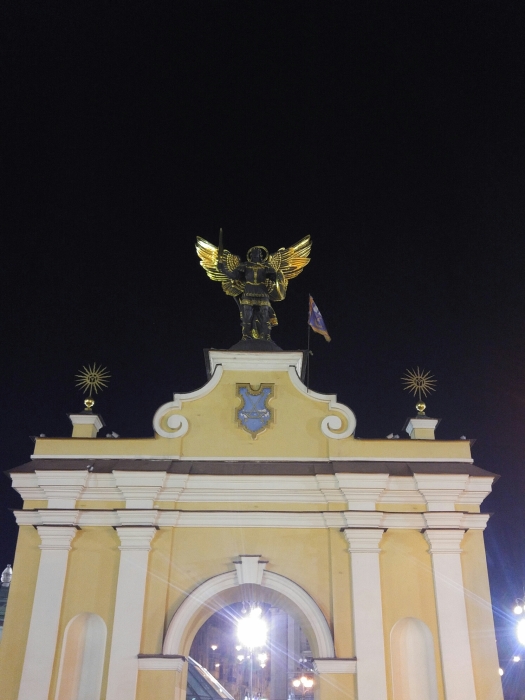 Ukraine is not quite the place Westerners imagine it to be. Eastern Europe doesn’t exist the way we used to think of it–after all, the Cold War is over, and the Soviet republics that used to unite the region no longer exist. Ukraine is not a cold, gray place of existential despair and backwardness. McDonald’s abound with free Wi-Fi, and you can find a flat white on any coffee kiosk menu. You might notice a sense of controlled chaos as a Zamboni tries to clean the mud tracked in from the snow during rush hour at the supermarket, but it’s still unmistakably a supermarket stocked with Italian cheeses and Asian noodles and Mexican hot sauce. You might be amused at the old-fashioned old ladies dressed in head-to-toe fur coats (we once counted 7 in our immediate surroundings on the bus), but the modern and innovative designs featured in “Made in Ukraine” shops make it clear that they are not stuck in the quagmire of the 20th century.

Sure, there are turbulent politics in the region, but looking at the world as a whole, we are seemingly entering a new age of turbulence. Ukraine is not unique in that regard. We thought Ukraine was becoming more like Western Europe or the US, but maybe we are also becoming more like Ukraine. I told Julia how I’ve started to adopt some of the interference my Polish students have in their English–using the wrong prepositions, awkward and misplaced modifiers, mixing up the particles in phrasal verbs. We can never expect cultural exchange to only flow one way. Maybe culture, like water, is looking for a state of equilibrium.

So what’s the best way to make that equilibrium positive? Over hot chocolate and fondue? Probably.

13 Replies to “From Ukraine, with love”